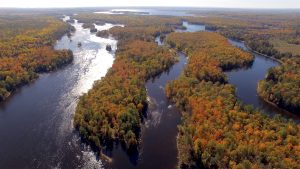 In the most recent edition of CAA Quebec Magazine, the Nature Conservancy of Canada published an article concerning Fitzpatrick Island, which is situated in the Ottawa River near l’Isle-aux-Allumettes. The western Quebec Director of the NCC, Caroline Gagné, indicated the reasons why the organization was interested in protecting the island.

“In particular a particular geology, there are caves, a network of underground caverns\ under the island which are filled with water,” she explained (translated). “It goes under the river itself and then it crosses from Ontario to Quebec. There are different species in a precarious situation that are there. There are old forests that have not been cut for several decades. It’s really interesting to see the wealth there. Property that has been protected, including the island which is right next to Fitzpatrick which is Reed Island, then there are also some properties that have been protected to the south on Marcotte Island. This is really proof that this is a sector that is very rich. This whole sector is really very rich, with the network of caves, we call that karstic ecosystems.”

Gagné named throughout the interview several partners and organizations that helped acquire the land and protect it.

“It takes several people, in fact, it takes funding to protect territory. Sometimes there are owners who give us donations or specials, a discount sale as I mentioned earlier,” she said (translated). “In this case, Fitzpatrick Island was protected thanks to the contribution of the provincial government, the federal government and private donors, some of whom I cannot name, they wished to remain anonymous. But, there is a donation from the Kruger corporation among others. So it’s really a combination of different funding, then the contribution, basically, in human resources of different people. Let it be experts who allow us to better document what we want to protect. There is also the Kebaowek community.”

The full (French-language) interview with Gagné, is available here.