On Friday evening, a fire tore through the Autobus LaSalle garage on West Street in Shawville, causing heavy damage to the building and several buses that were in the garage at the time. 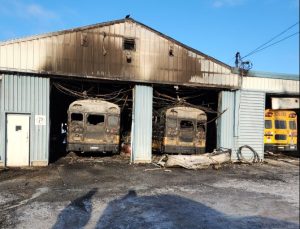 Shawville Clarendon Fire Chief Lee Laframboise said that they were called out around 8 p.m. on January 6, and responded with around 20 firefighters and four trucks. Another truck from the Bristol Fire Department was also dispatched to the call.

Laframboise said that, through the dispatcher, he requested a crew from Hydro Quebec to shut down power to the building shortly after arriving at the scene, but due to an apparent manpower shortage there was a serious delay in their arrival. He had to pull his crews out of the building when the fire reached the building’s electrical stack and started making ominous noises.

“It’s got big voltage there, lots of hydro,” he said. “The stack started burning … and then there’s just bad noise coming out of [it] there when it’s shorting like, you have 600 volts or whatever and it’s doing this [loud buzzing] and blue flames are shooting out of it. So I made the guys come out of the building and then I waited on hydro. I could have got the whole grid shut down but I hate to do that. It interferes with so many people’s lives, you know. Anyways, it ends up that the poor guy on the hydro truck had to come from Maniwaki. I guess there’s a shortage of workers for hydro.” 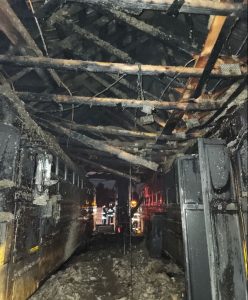 He said that a Hydro Quebec truck arrived around two hours after the initial request, which impeded his ability to fight the fire. He added that while he didn’t think it changed the amount of damage done to the building all that much, it definitely added to the time that they were on scene.

In total, Laframboise said that they were on scene until about 2 a.m. The fire was contained to the bays in the garage, where several buses were also damaged. He said that there was also quite a bit of smoke damage in the office part of the building, which is separated from the garage by a concrete wall.

CHIP 101.9 was unable to reach a representative of Autobus LaSalle for comment. CHIP 101.9 has reached out to Hydro Quebec for comment.

The cause of the fire is currently under investigation. 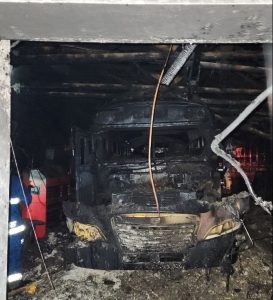