Local theatre troupe the Pontiac Community Players has another production in the works that will be hitting the stage at Pontiac High School in the new year. Director Val Twolan-Graham explained that the group has been working on their latest play “Hilda’s Yard” by Norm Foster since August. The cast of 6 actors as well as several crew are a mix of community theatre veterans and relative newcomers.

She explained that the play is a family comedy featuring couple Hilda and Sam Fluck going about their business with their grown-up children freshly out of the house. However, their tranquility is disturbed by a series of hilarious interruptions.

Twolan-Graham said that she has been interested in producing a play by Norm Foster for quite some time, and added that “Hilda’s Yard” was a good fit because of the simplicity of the set.

The full interview with Twolan-Graham (5m40) is available here. 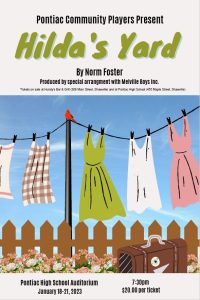