The leader of the upstart right-wing People’s Party of Canada, Maxime Bernier, was in the Pontiac on Wednesday (June 15), as part of his tour of the Outaouais-Laurentides region. He held a meet and greet from 4 to 6 p.m. at Brauwerk Hoffman Brewery in Campbell’s Bay that brought out a few dozen supporters. Brewery owner Todd Hoffman is a founding member of the Pontiac PPC riding association. 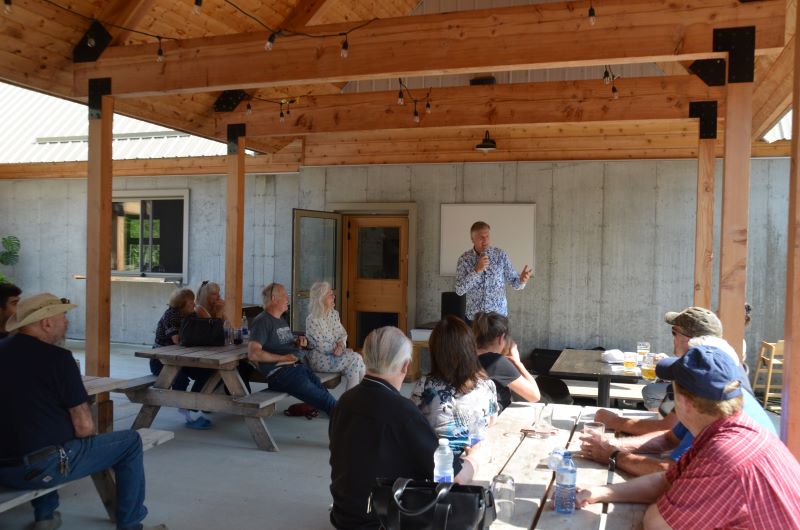 Bernier formed the party in 2018 after he departed the Conservative Party of Canada, where he had served in several roles in Stephen Harper’s cabinet. Bernier ran for the party’s leadership in 2017 and was narrowly defeated by Andrew Scheer. In the 2019 federal election, the PPC finished with 1.62% of the vote (294,092 votes). Two years later in the most recent national election, the party more than doubled its initial number of votes (840,993) or 4.94%, but didn’t win a parliamentary seat. In both elections, Bernier ran in the riding of Beauce, which he had represented from 2006 to 2019. He lost to Conservative Richard Lehoux with 28% of the vote in 2019 and 18% in 2021.

Bernier started by giving a lengthy stump speech covering a wide variety of the party’s political stances, from the opposition to public health restrictions related to the pandemic to ending supply management and heavily reducing immigration.

Bernier has been quite vocal in opposing federal and provincial public health measures, particularly travel restrictions and vaccine passports. He has accrued thousands of dollars worth of tickets for publicly breaching restrictions in various jurisdictions over the course of the last two years. He said that the recently announced easing of travel restrictions would be temporary, and added that he will continue to fight the restrictions in court.

He followed up his speech with a question and answer period with his supporters, where he explained his opposition to supply management for dairy and poultry products, and his views on government spending more broadly.

When asked about the Quebec government’s Bill 96, which was recently adopted, he said that it was provincial jurisdiction, and he would not interfere.

Bernier said that his goal for the next election would be to field representatives in all 338 ridings and also have 150 candidates officially selected by the end of the year, including the candidate for the Pontiac.