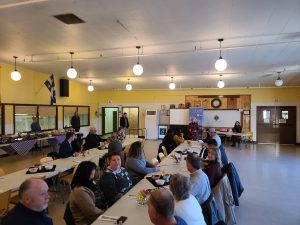 Yesterday morning (November 22), the MRC Pontiac hosted a fundraiser breakfast at the Lions Hall in Shawville in support of Centraide

Outaouais, which is known more commonly in English Canada as United Way. The breakfast brought out several mayors, public officials and members of community organizations throughout the region. All told, organizer Warden Jane Toller said that it brought in $1,200 for the charitable organization, which supports seven different local charities in the Pontiac. Stephane Durocher, the director of the Pontiac Maison des jeunes and the Comptoir St. Pierre, described the kinds of activities they support.

He added that in addition to funding, Centraide offers training for local organizations as well. They also spearhead several regional initiatives such as the snowsuit fund and another which helps students purchase school supplies before the return to class.

The full interview with Durocher (6m) is available here.